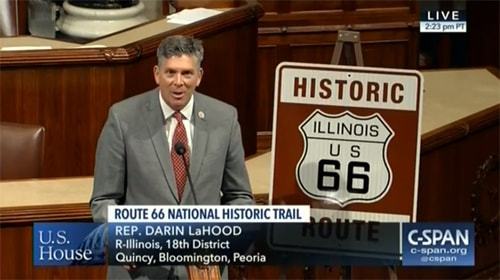 The U.S. House of Representatives on Tuesday evening approved by a voice vote the Route 66 National Historic Trail Act.

The bill advances to the U.S. Senate for consideration.

According to reports by the U.S. House clerk, lawmakers quickly suspended rules for debate and proceeded to vote on the bill, called HR 801, without objection.

Introduced by U.S. Rep. Darin LaHood (R-Ill.) in February 2017, the legislation eventually attracted 21 co-sponsors from nine states — including lawmakers from all the eight states Route 66 traverses. The bill advanced through a House subcommittee in January.

This is a summary of the bill:

H.R. 801 amends the National Trails System Act to designate a trail of approximately 2,400 miles extending from Chicago, Illinois, to Santa Monica, California, as the Route 66 National Historic Trail. The trail will be administered by the National Park Service in a manner that respects and maintains its idiosyncratic nature.