David Jackson had a dream. He loved history and collected many items pertaining to his hometown. As editor of the Litchfield News Herald, he had access to old newspapers and wrote a column called Break Time where he educated the readers about the history of our town, the people in it, and the area surrounding it. He wanted Litchfield to have a museum to preserve our rich history. Even though Dave did not live to see the museum become a reality, his wife, Martha, and daughter, Anne, have worked with a like-minded group to make the dream come true.

In the spring of 2011, planning for the museum began. Grants from the Corwin and Elizabeth Baker Trust Funds provided seed money for the Litchfield Museum Association. Property was purchased on Historic Route 66 and donated to the Association on June 14, 2011. The first money-making project was the sale of our book, “Greetings from Litchfield, Illinois, Pictorial History In Postcards”. Several of these postcards were enlarged, and now hang from the ceiling of the museum. Books are still available for purchase at the museum.

On April 23, 2012, a groundbreaking ceremony was held and on May 1, construction started. Also that month, another fund- raising project began. Andy Ritchie, an Association member, made the 2,000+ mile bicycle trip on Route 66 from California to Chicago, IL.

Late in 2012, the association began accepting donated items to be displayed in the museum. The grand opening of the museum was held on June 1, 2013. The Vic Suhling – Gas For Less sign was refurbished and stands proudly in its original location welcoming visitors from around the world. 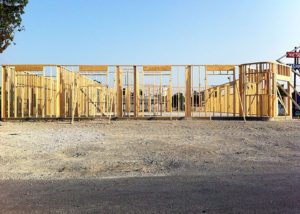 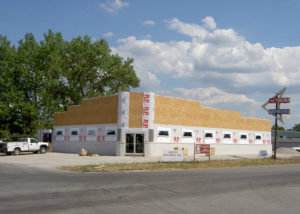 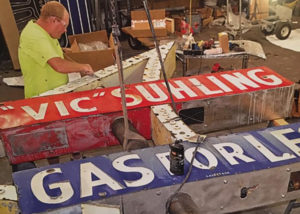 As you enter the building, you will find a desk from the original city hall and the Litchfield Fire Department’s hand-drawn fire wagon. Just past the fire wagon, a mural of Litchfield past and present can be found.

Our Historic Route 66 display features Bob Waldmire maps and drawings, an original Route 66 road sign, a gas pump, an old automobile and much more, including a flip-chart with pictures, then and now, of businesses along this area of the “Mother Road.”

There is a large display pertaining to the schools of Litchfield. The history section includes the country schools as well as the town schools. There are pictures of teachers, administration, and graduates throughout the years. Visitors with area roots often snap pictures with their phones and send them off to relatives they find in the display.

Another section that seems to catch many visitors’ eye is the veterans section. We have a nice assortment of items from early wars along with articles and pictures. In the conference room, you will find many pictures, including workers at Brown Shoe and the Litchfield Creamery. There is a nice drawing of the Litchfield Mill aka the Planet Mill which was the largest steam mill in the world at the time. Throughout the museum, you will find information about and photos of local government, churches, homes, organizations, and businesses.

The Montgomery County Genealogical Society was invited to have their Research Center in a portion of the building. Besides providing a fine genealogy/history library, their volunteers assist the museum with special projects and opening and closing the building.

After the Museum was built, office space was offered to the Litchfield Chamber of Commerce for their executive director. The Chamber promotes the city and assists new businesses and residents.