Litchfield and Central Illinois is blessed with numerous highlights of Route 66. Below is a brief list of locations in Litchfield, or within a short drive. Enjoy your trip along Route 66!

The Cozy Dog Drive In in Springfield, Illinois is the home of the one and only “Cozy Dog.” The Cozy Dog is a delicious hot dog on a stick that is found nation-wide at many county and state fairs. They were invented by Ed Waldmire Jr., and are still made fresh with their own special recipe batter.

Cozy Dogs were officially Launched at the Lake Springfield Beach House on June 16th, 1946, and were introduced at the Illinois State Fair the same year. The first Cozy Dog House was located on South Grand between Fifth and Sixth Street in Springfield. A second Cozy Dog House was located at Ash & MacArthur. In 1949, Drive In was born; built on “Route 66” South Sixth Street. In 1996 Cozy Dog moved to its current location, where Sue (Ed’s daughter in law) Josh, Eddie, Tony & Nick (Ed’s grandsons) continue on with the business right next door to the original location. 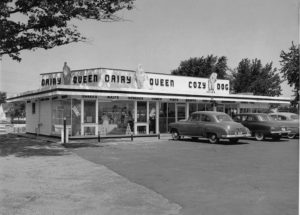 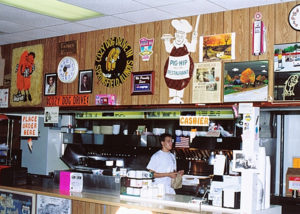 Click here for more information about the Cozy Dog Drive-In

Our Lady of the Highways

Located along Historic Route 66 in the panhandle of Montgomery County, Illinois, the Shrine of Our Lady of the Highways has watched over travelers along the Mother Road and Interstate 55 since the late 1950’s. While much of the pavement of Route 66 has been returned to the fields of rural Central Illinois, the Shrine remains as a testament to the weary traveler and Mother Mary’s guidance and protection over the highway and her travelers.The Carrara Marble Statue of Our Lady of Lourdes from Italy was originally constructed as a high school project. It is inscribed “Mary, Loving Mother of Jesus, Protect us on the Highway”. Also along the road from this site is a trail of Burma Shave type signs of the Hail Mary. 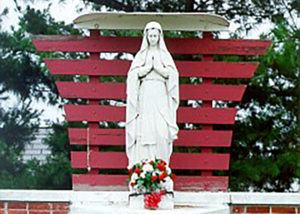 Click here for more information about Our Lady of the Highways

The Sky View Drive-In theater in Litchfield, IL celebrated it’s 66th year on Historic Route 66 in 2016. It is the last originally operating drive-in on Historic Route 66 in Illinois, and one of only 4 in the nation. The Sky View is in the Route 66 Hall of Fame and hosts a Wayside Exhibit at the front of the property. This exhibit, placed by the Scenic Byway, tells stories of patrons and some history of the property.

The Sky View opened in the spring of 1950 and has been in seasonal operation since then. The original owner/operator was Frisina Enterprises. It was then sold to Mid America Theaters and then to Norman and Del Paul. March 1st of 2016 the Sky View was purchased by Pastro Properties Inc, comprised of Mike, Debbie, Nick and Mindy Pastrovich. The family will be taking a more hands on approach and is excited to be a part of both local and Route 66 history.

The theater will be in season operation from early April till mid October, weather permitting. 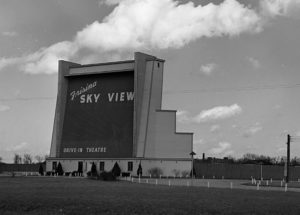 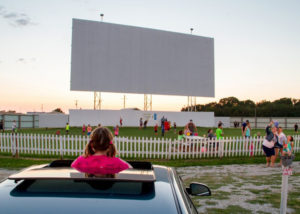 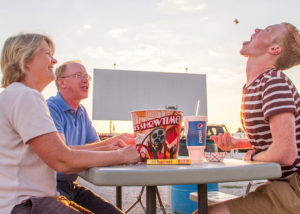 Click here for more information about Sky View Drive In

The Ariston Café is believed to be the oldest continuously operated restaurant on Route 66. In 1992 the Ariston Cafe and the Adam family were inducted into the Route 66 Hall of Fame. Since 2006, we’ve been on the U.S. National Register of Historic Places. The Ariston Cafe was founded by Pete Adam, a Greek immigrant, in Carlinville, IL in 1924. The original cafe was located on Route 4, the predecessor of Historic Route 66. In 1929, the Cafe was relocated to Litchfield, IL and moved into its present location in 1935, where it has remained ever since. 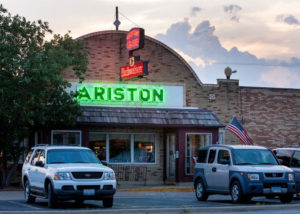 Click here for more information about the Ariston Cafe

A full menu with homemade soups, salads, sandwiches, and dinner options is also available! Breakfast is served all day. Catering and party trays are available. Open daily from 6 AM to 8 PM. 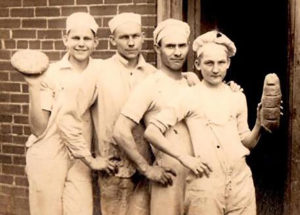 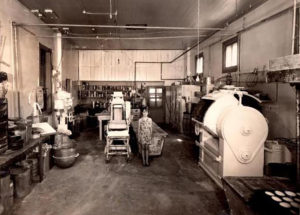 Click here for more information about the Jubelt’s Bakery & Restaturant

The advent of the national road system in 1926 ushered in a golden age for mom-and-pop entrepreneurs. For Henry Soulsby of Mount Olive, it happened just in time. Mr. Soulsby followed his father, an Irish immigrant, into mining, but in the mid-1920s an injury forced him aboveground. Understanding that a national highway would soon pass through Mount Olive, he invested most of his life savings in two lots at the corner of 1st Street, now called Old Route 66. With the balance he built a gas station.The Soulsby Station is an excellent example of a house with canopy form. By the time Mr. Soulsby built his station in 1926, the leading oil companies had been hiring architects to design stations that would blend well with neighborhoods to minimize local opposition to the crudeness often associated with gas stations. Mr. Soulsby designed the building himself, taking into account these trends and blending well with the surrounding area. 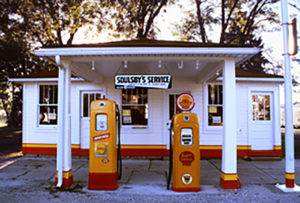 Click here for more information about the Soulsby Station 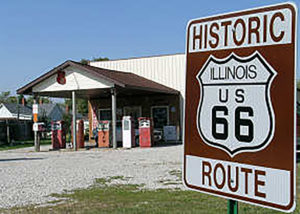 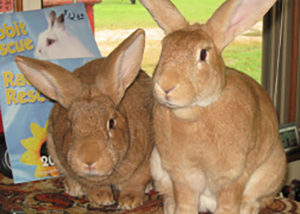 Chain of Rocks Bridge is one of the more interesting bridges in America. It’s hard to forget a 30-degree turn midway across a mile-long bridge more than 60 feet above the mighty Mississippi. For more than three decades, the bridge was a significant landmark for travelers driving Route 66.

The bridge’s colorful name came from a 17-mile shoal, or series of rocky rapids, called the Chain of Rocks beginning just north of St. Louis. Multiple rock ledges just under the surface made this stretch of the Mississippi River extremely dangerous to navigate. In the 1960s, the Corps of Engineers built a low-water dam covering the Chain of Rocks. That’s why you can’t see them today. Back in 1929, at the time of the construction of the bridge, the Chain was a serious concern for boatmen.

Today you might say that the Chain of Rocks Bridge has completed a historic cycle.  Built at the beginning of America’s love affair with the automobile, it is now a reflection of America’s desire not to ride in cars so often.  During the 1980s, greenways and pedestrian corridors became increasingly popular, and a group called Trailnet began cleanup and restoration of the bridge.  Linked to more than 300 miles of trails on both sides of the river, the old Chain of Rocks Bridge reopened to the public as part of the Route 66 Bikeway in 1999.

Because the bridge has not been significantly altered over the years, a visit there today conveys a strong sense of time and place, an appreciation for early-20th-century bridge construction, and outstanding views of the wide Mississippi River.  The Chain of Rocks Bridge was listed in the National Register of Historic Places in 2006. 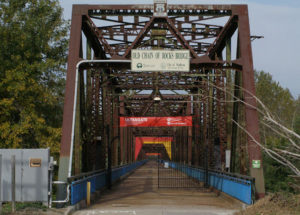 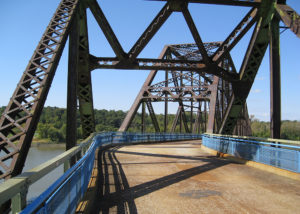 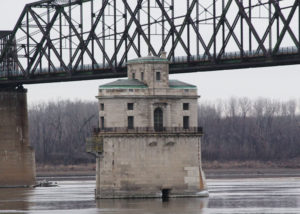